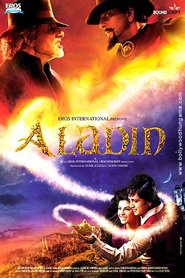 Here you will find out the exact Aladin 2009 film release date and the full information about its cast and crew. Also you may find high quality pictures and hd wallpapers of the movie. If you have already watched Aladin please rate it and leave your review to help other users to know if this movie worth their attention.
Year: 2009
Country: India
Release date:

-
Genre: Action, Drama, Comedy, Romance, Adventure, Fantasy
Director: Sujoy Ghosh
Cast: Shubhankar Atre, Amitabh Bachchan, Victor Banerjee, Dhaval Barbhaya, Michael Chen, Master Ahan Desai, Ritesh Deshmukh, Sanjay Dutt, Erina, Jaqueline Fernandes
Screenwriter: Sujoy Ghosh, Suresh Nair, Ritesh Shah
Producer: Sujoy Ghosh, Sunil Lula
Operator: Shirsha Roy
Composer: Vishal Dadlani, Shekhar Ravjiani
Duration: 132 min. / 02:12
Description: Based in the municipality of Khwaish, abused by his classmates, Aladin Chatterjee, who was orphaned when his parents, Arun and Riya, died in an accident in Siachen Valley, lived with his paternal grandfather until the later's passing. Now alone, grown up, studying in Khwaish University, and still being abused by fellow-college mates, he finds himself smitten by the lovely US Exchange Student, Jasmine. Unable to express his feelings for her, he rubs a lamp that was gifted to him on his birthday, which summons a genie named Genius. He gets 3 wishes, but wastes 2 of them, but on the 3rd one he insists that Genius assist him to win Jasmine's heart without any magical tricks. Hilarious chaos result when everything seems to fail while an immortal and deadly entity, Ringmaster, and his hordes, prepares to confront Genius and Aladin so that he can acquire more magical powers with the help of the lamp on the day of the sighting of a rare comet and the truth behind the death of Aladin's parents.
2.5
Rating: The average rating is calculated on the basis of 2 votes.
Your rating:
http://film.moviesfan.org/c/aladin-3473/ 7920
IMDb Rating:
4.6
1,488 votes. 1488 10 1

Creators of the movie
Sujoy Ghosh

Home Delivery: Aapko... Ghar Tak
For the fans of the genre like fantasy,action,drama,romance,comedy,adventure and who likes director Sujoy Ghosh this movie will become a real present! Check the Aladin crew and synopsis, watch pictures and high resolution wallpapers. If the premiere of this movie has already taken place then IMDB rating and users reviews will help you to understand if you should watch this movie in the cinema or buy DVD.