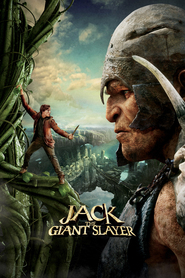 Here you will find out the exact Jack the Giant Slayer 2013 film release date and the full information about its cast and crew. Also you may find high quality pictures and hd wallpapers of the movie. If you have already watched Jack the Giant Slayer please rate it and leave your review to help other users to know if this movie worth their attention.
Year: 2013
Country: United States
Release date:

27 February 2013
Genre: Adventure, Fantasy
Director: Bryan Singer
Cast: Nicholas Hoult, Eleanor Tomlinson, Ewan McGregor, Stanley Tucci, Ian McShane, Bill Nighy, John Kassir, Ben Daniels, Ewen Bremner, Eddie Marsan
Screenwriter: Darren Lemke, Christopher McQuarrie, David Dobkin
Producer: Bryan Singer, John Rickard, Michele Weiss, Michael Disco, Toby Emmerich, Alex Garcia, Jon Jashni, Ori Marmur
Operator: Newton Thomas Sigel
Duration: 114 min. / 01:54
Description: The story of an ancient war that is reignited when a young farmhand unwittingly opens a gateway between our world and a fearsome race of giants. Unleashed on the Earth for the first time in centuries, the giants strive to reclaim the land they once lost, forcing the young man, Jack into the battle of his life to stop them. Fighting for a kingdom, its people, and the love of a brave princess, he comes face to face with the unstoppable warriors he thought only existed in legend–and gets the chance to become a legend himself.
5
Rating: The average rating is calculated on the basis of 1 vote.
Your rating:
http://film.moviesfan.org/c/djek-pokoritel-velikanov-346804/ 6840
IMDb Rating:
6.3
75,742 votes. 75742 10 1

Creators of the movie
Bryan Singer

Mockingbird Lane
For the fans of the genre like adventure,fantasy and who likes director Bryan Singer this movie will become a real present! Check the Jack the Giant Slayer crew and synopsis, watch pictures and high resolution wallpapers. If the premiere of this movie has already taken place then IMDB rating and users reviews will help you to understand if you should watch this movie in the cinema or buy DVD.