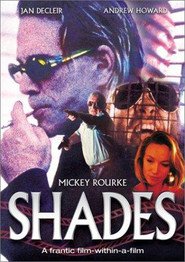 Here you will find out the exact Shades 1999 film release date and the full information about its cast and crew. Also you may find high quality pictures and hd wallpapers of the movie. If you have already watched Shades please rate it and leave your review to help other users to know if this movie worth their attention.
Year: 1999
Country: Belgium
Release date:

15 October 1999
Genre: Drama, Comedy
Director: Erik Van Looy
Cast: Mickey Rourke, Gene Bervoets, Andrew Howard, Mireille Leveque, Jan Decleir, Mike Verdrengh, Hilde Van Mieghem, Tom Van Bauwel, Rudolph Segers, Koen De Bouw
Screenwriter: Paul Breuls, Guy Lee Thys
Producer: Paul Breuls, Guy Lee Thys, Gregory Cascante, Catherine Vandeleene
Operator: Danny Hiele
Duration: 93 min. / 01:33
Description: Shades is a film about (imaginary) Belgian serial killer Freddy Lebecq which producer Max Vogel, a former lawyer, is determined to make into an internationally co-produced, relatively big budget-production Hollywood style, with a director from the States. To that end he cuts deals with and often behind the backs of just about everybody, including Lebeq -who has the book rights-, his lawyer who hopes to use proceeds donated to the relatives to facilitate early release, even the victims, always trying to get the media circus to yield priceless publicity. However not only the lead actor proves a loose canon, even Lebecq ends up killing his lawyer and escaping, when he believes the movie is hurting his case
5
Rating: The average rating is calculated on the basis of 1 vote.
Your rating:
http://film.moviesfan.org/c/glazami-ubiytsyi-13636/ 5580
IMDb Rating:
5.6
411 vote. 411 10 1
Share with friends:

Ad Fundum
For the fans of the genre like drama,comedy and who likes director Erik Van Looy this movie will become a real present! Check the Shades crew and synopsis, watch pictures and high resolution wallpapers. If the premiere of this movie has already taken place then IMDB rating and users reviews will help you to understand if you should watch this movie in the cinema or buy DVD.