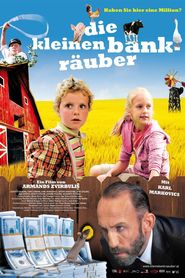 Here you will find out the exact Mazie laupitaji 2009 film release date and the full information about its cast and crew. Also you may find high quality pictures and hd wallpapers of the movie. If you have already watched Mazie laupitaji please rate it and leave your review to help other users to know if this movie worth their attention.
Year: 2009
Country: Austria, Latvia
Release date:

10 December 2009,
Genre: Drama, Comedy, Crime, Family
Director: Armands Zvirbulis
Cast: Gustavs Vilsons, Zeyn Lemeyn, Arturs Skrastins, Juris Zagars, Karl Markovics, Gunar Platsens, Skaidrite Putnina, Ayya Djerve, Imants Strads, Gundars Abolins
Screenwriter: Maris Putnins
Producer: Katja Dor-Helmer, Fiona Meisel, Gatis Upmalis
Operator: Rein Kotov
Composer: Martins Brauns
Duration: 80 min. / 01:20
Description: Can you honestly swear that at least once in your life you have not thought that robbing a bank is a good idea? Especially, if you're five years old and that bank has just thrown your parents out of a brand new apartment, because your father has lost his job. Five year old Robby is no Zorro, but he'd like to be. His seven year old sister Louise thinks he's too childish, but can't resist the game of robbing a bank. Together they can pull off just about anything. Getting away with it is the hard part.
-
Rating: No one has voted
Your rating:
http://film.moviesfan.org/c/malenkie-razboyniki-5952/ 4800
IMDb Rating:
6.1
142 votes. 142 10 1

Creators of the movie
Armands Zvirbulis

Mazie laupitaji
For the fans of the genre like drama,comedy,crime,family and who likes director Armands Zvirbulis this movie will become a real present! Check the Mazie laupitaji crew and synopsis, watch pictures and high resolution wallpapers. If the premiere of this movie has already taken place then IMDB rating and users reviews will help you to understand if you should watch this movie in the cinema or buy DVD.