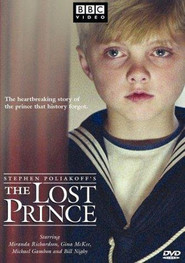 Here you will find out the exact The Lost Prince 2003 film release date and the full information about its cast and crew. Also you may find high quality pictures and hd wallpapers of the movie. If you have already watched The Lost Prince please rate it and leave your review to help other users to know if this movie worth their attention.
Year: 2003
Country: United Kingdom, United States
Release date:

19 January 2003
Genre: Drama
Director: Stephen Poliakoff
Cast: Daniel Williams, Matthew James Thomas, Brock Everitt-Elwick, Rollo Weeks, Gina McKee, Tom Hollander, Miranda Richardson, Bill Nighy, Bibi Andersson, Ron Cook
Screenwriter: Stephen Poliakoff
Producer: John Chapman, Joanna Beresford, Rebecca Eaton, Peter Fincham, Mark Hubbard, David M. Thompson
Operator: Barry Ackroyd
Composer: Adrian Johnston
Duration: 180 min.
Description: The Lost Prince is an acclaimed British television drama about the life of Prince John – youngest child of Britain's King George V and Queen Mary – who died at the age of 13 in 1919. John suffered from epileptic seizures and an autism-like developmental disorder, and the Royal Family tried to shelter him from public view as much as possible; rather than presenting the Royal Family as unsympathetic to the Prince, the film instead shows how much this cost them emotionally (particularly John's mother, Queen Mary). Poliakoff explores the story of John, his relationship with his family, John's brother, Prince George, the political events going on at the time (like the fall of the House of Romanov in 1917) and the love and devotion shown to him by his nanny, Charlotte Bill (known as Lalla), played by Gina McKee.
-
Rating: No one has voted
Your rating:
http://film.moviesfan.org/c/poteryannyiy-prints-tv-8688/ 10800
IMDb Rating:
8
1,007 votes. 1007 10 1
Share with friends:

Creators of the movie
Stephen Poliakoff

Food of Love
For the fans of the genre like drama and who likes director Stephen Poliakoff this movie will become a real present! Check the The Lost Prince crew and synopsis, watch pictures and high resolution wallpapers. If the premiere of this movie has already taken place then IMDB rating and users reviews will help you to understand if you should watch this movie in the cinema or buy DVD.