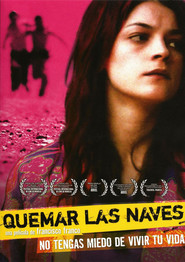 Here you will find out the exact Quemar las naves 2007 film release date and the full information about its cast and crew. Also you may find high quality pictures and hd wallpapers of the movie. If you have already watched Quemar las naves please rate it and leave your review to help other users to know if this movie worth their attention.
Year: 2007
Country: Mexico
Release date:

10 October 2007
Genre: Drama
Director: Francisco Franco
Cast: Irene Asuela, Juan Carlos Barreto, Bernardo Benitez, Ricardo Blume, Diana Bracho, Pablo Brasho, Juan Costa, Alberto Estrella, Jose Carlos Femat, Roberto Luna
Duration: 100 min. / 01:40
Description: Eugenia is a former pop singer who is bedridden and dying of cancer. She is cared for by her daughter, Helena, who dreams of traveling the world and wishes she could be a glamorous pop star like her mother was. Helena’s younger brother Sebastian's dreams are simple and he merely wants to move to the beach. Helena is smart and pretty but she has no friends, male or female and is totally devoted to her mother's care and is also on the verge of initiating an incestuous relationship with Sebastian. Sebastian however, is falling in love with a boy at school named Juan who is the school roughneck and the son of a single father who owns a little bar. Juan is the nemesis of the school preppy named Ismael who comes from such a wealthy home that he has his own chauffeur and bodyguards. Ismael's ping-pong obsessed girlfriend Aurora rents a room at Helena and Sebastian's house where Ismael discovers he is also attracted to Sebastian.
-
Rating: No one has voted
Your rating:
http://film.moviesfan.org/c/sjigaya-mostyi-159/ 6000
IMDb Rating:
7.2
491 vote. 491 10 1

Creators of the movie
Francisco Franco

Viajes del boton
For the fans of the genre like drama and who likes director Francisco Franco this movie will become a real present! Check the Quemar las naves crew and synopsis, watch pictures and high resolution wallpapers. If the premiere of this movie has already taken place then IMDB rating and users reviews will help you to understand if you should watch this movie in the cinema or buy DVD.