Red Alert: The War Within movie cast and synopsis.

Red Alert: The War Within 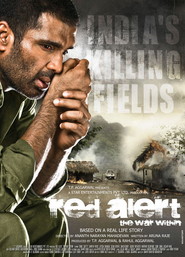 Here you will find out the exact Red Alert: The War Within 2009 film release date and the full information about its cast and crew. Also you may find high quality pictures and hd wallpapers of the movie. If you have already watched Red Alert: The War Within please rate it and leave your review to help other users to know if this movie worth their attention.
Year: 2009
Country: India
Release date:

19 July 2009
Genre: Action, Drama, News, Thriller
Director: Anant Mahadevan
Cast: Sunil Shetty, Sameera Reddy, Ashish Vidyarthi, Vinod Khanna, Naseeruddin Shah, Sima Bisvas, Ayesha Dharker, Makrand Deshpande, Ehsan Khan, Bhagyashree
Duration: 120 min. / 02:00
Description: While delivering food in a forest area in Andhra Pradesh, impoverished Narasimha is held against his will by a band of Naxalites led by Velu, and forced to join them. He is anxious to collect his dues and return home to his wife, Uma; daughter, Chinna; and son, Mohan, but Velu keeps on putting it off. Narasimha gets to know and sympathize with members of this band, and befriends Lakshmi, who was gang-raped by several policemen. He is then asked to prove his loyalty by killing an informant/plainclothes police inspector - which he does - and even accompanies the band on an assault on a school, resulting in the death of some children. Traumatized after this incident, he decides to flee - and it is this decision that will not only estrange him from his family but also force him to be on the run from the band as well as the police.
2.3
Rating: The average rating is calculated on the basis of 3 votes.
Your rating:
http://film.moviesfan.org/c/v-plenu-u-naksalitov-4612/ 7200
IMDb Rating:
6.4
208 votes. 208 10 1

← All Red Alert: The War Within pictures
Share with friends:

Creators of the movie
Anant Mahadevan

Red Alert: The War Within

Victoria No. 203: Diamonds Are Forever

Life's Good
For the fans of the genre like news,action,thriller,drama and who likes director Anant Mahadevan this movie will become a real present! Check the Red Alert: The War Within crew and synopsis, watch pictures and high resolution wallpapers. If the premiere of this movie has already taken place then IMDB rating and users reviews will help you to understand if you should watch this movie in the cinema or buy DVD.