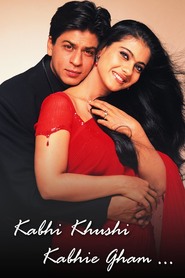 Here you will find out the exact Kabhi Khushi Kabhie Gham... 2001 film release date and the full information about its cast and crew. Also you may find high quality pictures and hd wallpapers of the movie. If you have already watched Kabhi Khushi Kabhie Gham... please rate it and leave your review to help other users to know if this movie worth their attention.
Year: 2001
Country: India
Release date:

14 December 2001
Genre: Musical
Director: Karan Johar
Cast: Amitabh Bachchan, Jaya Bhaduri, Shah Rukh Khan, Kajol, Hrithik Roshan, Kareena Kapoor, Rani Mukherjee, Farida Jalal, Alok Nath, Johnny Lever
Screenwriter: Karan Johar, Nina Parikh
Producer: Hiroo Johar, Yash Johar
Duration: 210 min. / 03:30
Description: Orthodox Indian, Raichand, would like his two sons to live together with him and his wife, and get married to girls' of his choice. One of his sons, Rahul, is adopted, while Rohan is his real son. Rahul falls in love with a poor Indian girl named Anjali, and incurs the displeasure of Raichand, they argue and fight, as a result Rahul leaves the house, moves to Britain, and settles down. Raichand now focuses his attention on his real son, Rohan, who has no plans to get married, but is determined to bring Rahul and Anjali back home so that they can be together again. Will Raichand permit Rohan to have his way, or will he also ask him to leave the house?
10
Rating: The average rating is calculated on the basis of 1 vote.
Your rating:
http://film.moviesfan.org/c/i-v-pechali-i-v-radosti-190420/ 12600
IMDb Rating:
7.4
16,865 votes. 16865 10 1

Creators of the movie
Karan Johar

Student of the Year

My Name Is Khan

Kabhi Alvida Naa Kehna
For the fans of the genre like musical and who likes director Karan Johar this movie will become a real present! Check the Kabhi Khushi Kabhie Gham... crew and synopsis, watch pictures and high resolution wallpapers. If the premiere of this movie has already taken place then IMDB rating and users reviews will help you to understand if you should watch this movie in the cinema or buy DVD.